SportsBroker provide something different to the other sites you can read about here.  They offer a peer-peer trading platform that is not regulated by the UKGC.  The idea is you buy shares in football teams, such as in the Premier League, and those shares go up or down based on performance.  Shares can be bought or sold at any time, you could trade in-play up to holding shares for an entire season, whatever suits you.

The structure is not that different to an exchange but rather than fixed values you are buying shares, effectively from other people.  SportsBooker themselves take a commission on shares that have increased in value (not on shares that lose value). Deposits start at £10 and you can buy whole shares or fractions of shares, allowing those of different levels to get involved.

The company behind the brand, Sport Brokers (UK) Ltd, was set up in 2019 and went live at the end of 2020 and in case you are worried they are nothing like Football index, who had to shut down in early 2021.  Football Index were regulated by the UKGC, they provided dividends that in effect became unaffordable.  SportsBroker don’t offer dividends, they only take a commission on shares that increase in value, it is peer-peer so you are trading shares with other people.  Therefore SportsBroker cannot suffer the same issues as Football Index. 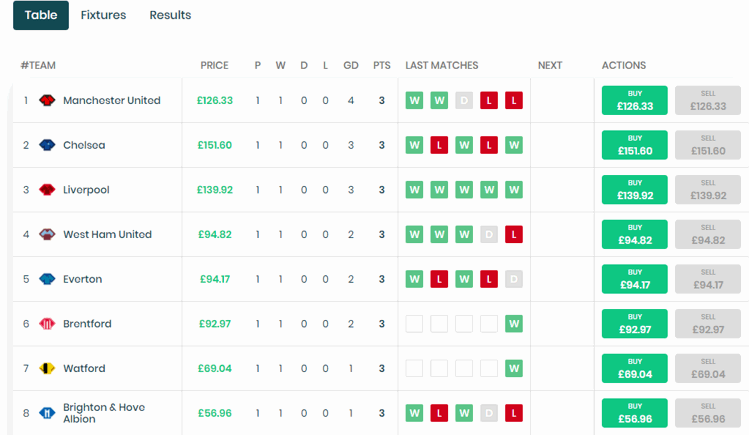 If you have ever used an exchange the layout will look very familiar to you but instead of backing and laying at fixed values here you are buying whole or fractions of shares in football teams.  These shares have a live price that alters based on performance and demand.  Very much like traditional stock markets work.  You can buy and sell shares at any time and will only pay a small commission to SportsBroker if those shares have increased in value.

Share prices vary depending on the team, with top teams having the highest share price and teams near the bottom having the lowest.  There is no need to feel you need to buy whole shares, you can buy fractions of shares with any amount you wish.  If, for example, you wanted to buy shares in Liverpool at £140 but you don’t want to buy a whole share you could buy say one tenth of a share for £14 (or any fraction you like).

When you buy or sell shares they become open orders and are then matched with someone who wants to buy or sell at that amount.  SportsBroker will then attempt to execute your trade at the current market value up to a minimum of 95%. If the value falls below 95% your order will be aborted.

Most open orders are matched within 30 seconds, similar again to an exchange in how the peer-peer element works.

The SportsBroker interface is very intuitive and exceptionally easy to use on both mobile and desktop.  The fact it is a focused product, with the only option being buying and selling shares in football teams, means there is absolutely no clutter, the site is exceptionally fast.

Currently shares can be bought in Premier League and Championship teams, although more top leagues are going to be added in the future (e.g. Serie A, La Liga, etc).

Now that you understand the basic concept of Sporsbroker you can see they very much do what the brand name suggests, they are a brokerage for trading shares in football teams with other people.

When To Buy and Sell?

We cannot offer you advice on what teams to buy and when, this is all down to personal preference and attitude to risk.  What we can do is give you some pointers on what affects share prices and the types of trades you can do.

Share prices change all of the time, like with stocks and shares, depending on demand based on the number of people buying and selling.  Share prices are predominantly influenced by performance, though, which means it is ultimately during games that share prices change the most.

Actual prices are calculated using an algorithm designed by SportsBroker.  While they cannot tell you exactly how the algorithm works it is based on a league position weighting, so backing the underdog can be worth more in some matches than backing the top team if you think the underdog will perform better than expected. Factors that affect share price include; goals, possession, shots on target, conceding corners or fouls, yellow and red cards, etc.

If that is not all clear then fortunately SportsBroker have an academy section (shown at the top of this section) that gives you clear examples and details of how to buy and sell shares.

Playing The Short vs Long Game 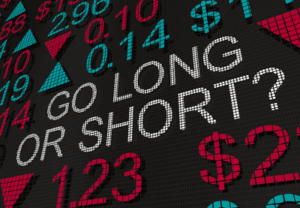 Shares can be bought and sold within minutes or they can be held for an entire season.  Whether you play the short game or the long game is entirely up to you and will reflect how you like to trade shares.  It is very similar to people who choose to buy stocks in financial markets and sell them quickly vs holding them for long periods.

During matches it is the performance on the pitch that counts.  You can make in-play predictions based on your own football knowledge.  For example, you may be watching a game where Team A is winning but Team B is starting to come into the game more, you feel they will perform better towards the end of the game and maybe score and go on to draw or even win.  This would be a good time to buy shares in Team B.

Whether you choose to buy and sell shares live during a game or hold on to them for several games, or a whole season, the ultimate idea is to buy low and sell high.

After every game SportsBroker considers if a share split is needed.  Share splits are basically a a readjustment of the share price, this is done to ensure everyone is able to place an order on any team.

The change in the price will be accompanied by a change in the number of shares you own, either by a positive or negative amount so that your overall value is unaffected. That means you do not lose any value, all it does is make sure that a new user has a chance to play SportsBroker. 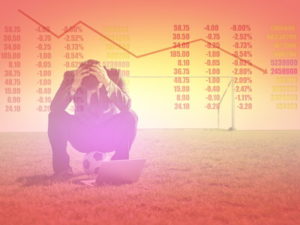 Generally all shares will have a value so even if your shares lose money you can still trade them and get something back.  In rare situations, however, it is possible to lose all of the money from an order.  If a team performs particularly well against a team you own shares in it can send the value of those shares very low.

If it gets to a point where your shares are in effect worth nothing then those shares will be taken away from you, this is when ‘bankruptcy’ occurs and play is then suspended in that specific match.  SportsBroker will reset the price for the bankrupt team before putting it back into the market. SportsBroker will then wait for the market cap in that team to build back up before reopening the market.

To emphasise, while it is possible to lose all of the value in given shares it is a rare occurrence, in most cases your shares will have a value even after a loss in a game.

SportsBroker is not regulated by the UK Gambling Commission (UKGC).  This means it falls under the same regulatory system as financial institutions such as banks and insurance companies.

This is actually important as this is a share trading platform and it should be regulated by the correct body.  Those who remember the collapse of Football Index may recall that while shares could be bought in football players, that could rise and fall in value, along with dividends, this was regulated by the UKGC.  It was partly this that meant the company was not properly checked when it should have been leading to players losing money.

Therefore, it is reassuring that SportsBroker is managed by the appropriate body with far more experience in how to deal with companies like this, especially if things go wrong. 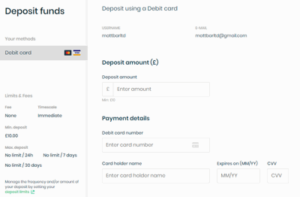 Deposits start at £10 and you can set your own maximum 24 hour, 7 day and 30 day limits from £10 up to £100k.  It is very much recommended that you set your limits before you start using the site.

You can also set playing limits, again on a 24 hour, 7 day or 30 day basis in order to help prevent problem gaming.  If you increase your limits there is a 24 hour pending period before these will apply and they have to be approved by SportsBroker.

Self-exclusion is also available for definite and indefinite periods, if you choose to self-exclude your shares will be sold at 100% market value and funds credited back to your account.  Likewise you can also close your account at any time.

Currently you can only deposit and withdraw via a debit card.  Customer support is available via live chat and email (support@sportsbroker.com) 24/7.

Sport Brokers (UK) Ltd are based in Huddersfield in Yorkshire, they are a UK company set up in 2019 entirely focused on the UK market. SportsBroker itself went live in September 2020.

Filling A Gap In The Market 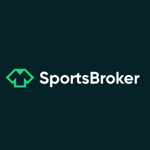 My personal perspective from having used SportsBroker is why has something like this has not existed before?  The model is simple, focused and highly effective at what it does.

If your main interest is following specific football teams and using your own knowledge to try to find an advantage then there are many positives to using a peer-peer trading platform compared to a traditional bookmaker.  The fact this is peer-peer means that SportsBroker themselves have no vested interest in which shares go up or down, it is entirely market and performance driven.  There is no book to balance, no exposure to cover off and no margins to worry about for the company.  They make their money from commissions on shares that have increased in value.

I wouldn’t say that what Sportsbroker are doing is revolutionary, it is a simple structure based on how existing trading platforms work.  I would, however, say they have filled a gap in the market by offering football fans a simplified means to trade in teams they like (or indeed don’t like) over a flexible period of time.