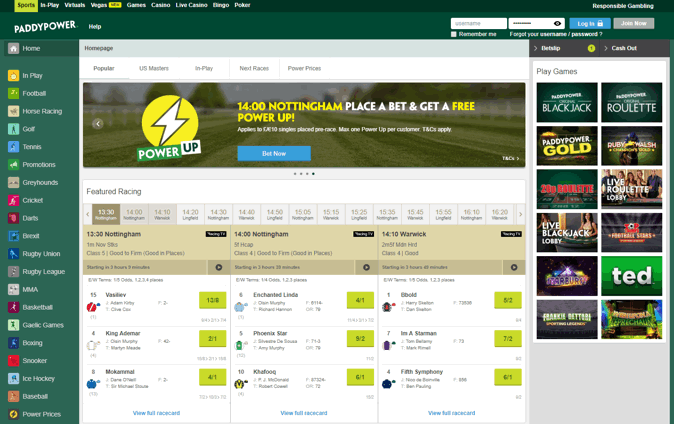 Paddy Power are a Marmite bookmaker, you will either love them or hate them. There is certainly no middle ground and I guarantee you will have an opinion either way.

The betting site is Ireland’s biggest, and now also a major player in world betting and gaming since merging with Betfair in 2016. Their sense of humour appeals to a certain type of punter, not taking themselves, or anything else for that matter, too seriously, and always ready to poke some good natured fun at whoever has earned it.

With huge resources the online bookie is able to provide massive market range and depth with all the features you would expect including streaming, cash out, cash betting, free bet clubs and more. Their coverage of Irish sports is predictably stronger than almost anywhere else, and they are also famous for their specials.

Money Back Cash up to £20
New customers only. Place your FIRST bet on any Football market and if it loses we will refund your stake in CASH. Max refund for this offer is £20. Only deposits made using cards will qualify for this promotion. T&Cs apply.
Claim Offer
T&Cs Apply, 18+ Only, Begambleaware.org / Gamstop.co.uk #ad 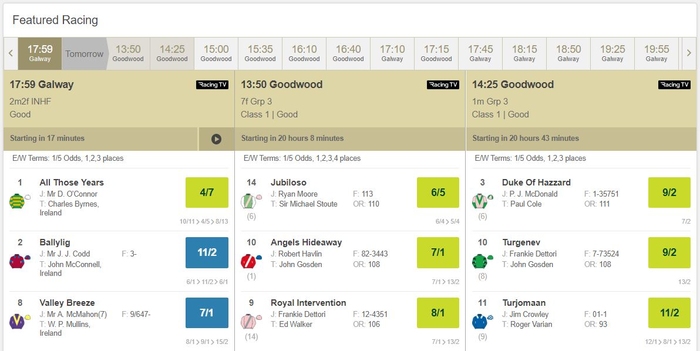 It’s no surprise that as an Irish bookmaker, Paddy Power are a great bet for Gaelic football and hurling. You will get full coverage here so it’s unlikely that you will find the same depth of market anywhere else, except perhaps Boyle Sports which is another huge Irish brand.

Greyhounds and horse racing also have a huge part to play in Paddy Power’s market portfolio, with races available from around the world in both categories. There are one or two other bookies that match or do a little better than this but not very many. I have to say though, the interface isn’t as user friendly here as it could be.

Famous for their specials, Paddy Power undoubtedly have the best range of funny, topical, political, and just down right bizarre betting markets out there. P. Diddy to be James Bond, which Royal baby will go bald first, what will be rationed first after Brexit. You name it.

There are 35+ sports categories in total, with all of the sports you would expect and a few more niche markets too. A few of the other more popular sports are:

Paddy Power used to be the third largest online bookmaker in the UK, but since merging with Betfair in 2016 they are now competing with Ladbrokes Coral for the top spot.

Although an Irish bookie who still run things from Dublin, the Paddy Power UK operation is now registered in Malta since the Betfair merger.

The company was established in 1988 when three different bookmakers came together and joined forces. The name comes from a reference to Irish heritage in ‘Paddy’ and the surname of one of the original founders David ‘Power’. The trio decided his surname offered the strongest branding.

David’s son, born in 1975, also happens to be called Patrick Power, named after his Grandfather, however, this is coincidental and played no part in the naming of the brand apparently.

Funnily enough, Patrick ‘Paddy’ Power is now the marketing manager for the company, and the brains behind some of the most controversial adverts they have put out. So he is Paddy Power of Paddy Power. 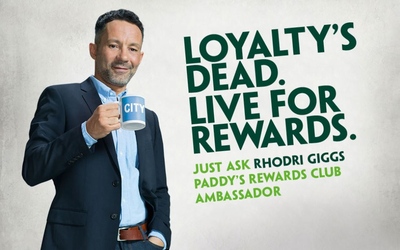 Paddy Power launched its online betting site back in 2000 and have been pushing it aggressively ever since. With their quirky humour they have been known to offer odds and markets on virtually anything, sometimes getting them into hot water.

This has made them very popular with the betting community, however, as they fit in perfectly with ‘lad culture’.

In no particular order, here are some of their greatest… erm… achievements:

For all their mischief you can tell that Paddy Power are good guys at heart. They generally openly support anything to do with equal rights including supporting gay marriage which, in Ireland, is a big deal.

So we know that Paddy Power are probably the funniest bookmaker in the industry, certainly the one with the biggest personality anyway, and the areas of the market that they focus on they do an excellent job in; but where could they do better?

Well, to be honest I don’t think their website is as effective as it could be. You could say it reflects their character: a bit wild, lots of exciting things going on, but not too concerned about the mess it is making. There is a lot of scrolling to be done too.

A re-think of the design and navigation options could make this powerful website a force to be recognised. It’s not a problem to use by any means, but it is shown up by quite a few other brands.

The in-play interface is also a bit boring. There’s plenty there, you won’t struggle to find things to bet on and there is a decent match tracker and stats, it just looks unfinished. Live streaming is pretty regular though.

It’s safe to say that Paddy Power are aiming for a ‘blokey’ market, and probably the kind of bettors that are quite switched on to social media, tech, and the modern ways of the world.

Not only do they accept a string of payment methods including Applepay – and with low deposit limits of £5 to boot – but they have also come up with a way to link their online operation to their high street shops, giving customers ultimate flexibility between the two.

The Cash Card / Play Card allows customers to use online funds in-store and vice verser. It also allows winning bets placed online to be withdrawn instantly instore instead of having to go through a lengthy withdrawal process.  With the Play Card you can also make deposits from any shops that display the PayPoint symbol, not just Paddy Power shops.

Building on that, they have also released the Cash Card PPlus. This one effectively treats your online betting account like a debit account. You can withdraw online funds from an ATM, use it to buy goods in certain shops/bars/restaurants, or use it to shop online.

Their regular withdrawal times can take up to 5 working days to reach your account using bank cards, although 2-3 is more normal. 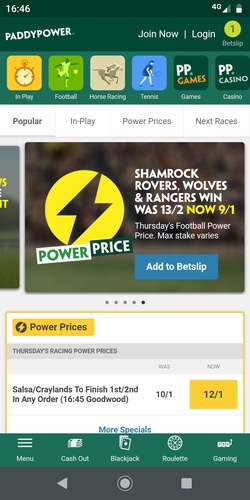 I love an app, and I can see the benefits of both approaches when bookies either create one that contains everything (sportsbook, casino, etc) and when they keep them separate. You can’t please everyone in this regard so you just have to make a choice and go with it.

Paddy Power, as they are known to do, have eschewed tradition here and instead of splitting their products into a couple of different apps, they have ten. Yes, they have hit double figures.

I suppose they are all nice options to have and it certainly doesn’t effect the punter/player so rock on Paddy Power, just seems a bit overkill.

Anyway, the apps are all good products, probably a little less responsive than they should be though. When it comes to moving around the interface they are spot on, but making selections comes with a short delay so you sometimes wonder if you need to tap again, and if you go to fast for it the app won’t register everything you have done – making multiple selections on the same screen for example.

The main thing is that they have an app and it contains pretty much everything the desktop site does, so if you tend to bet on your mobile you will be well looked after, and if you are a casino player more than a bettor and have limited space on your phone you can even be specific about the sort of content you download. 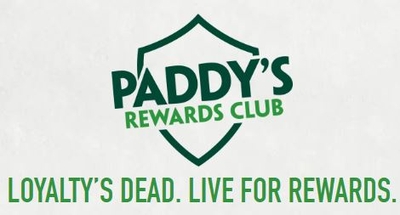 I couldn’t finish without mentioning the promotions. There are so many that you need to hit the More button three times before you come to the end of the list.

These span the entire site, sportsbook through to casino, and provide something for every type of bettor or casino player. Money back free bets are the most frequently dished out, and Power Prices (odds boosts) seem to be everywhere you look.

Free spins and bonuses are the order of the day at the casino, and horse racing punters can enjoy best odds guaranteed and extra place deals. There are even shop specific promotions.

Lastly, the Paddy Power Rewards Club aims to do away with loyalty points and give back directly in the short term for betting activity. Rewards are issued weekly so a busy week of betting or gaming will see instant rewards including free spins, free bets, match day pints, discounts, gifts, and live event invitations for top customers. Phew!