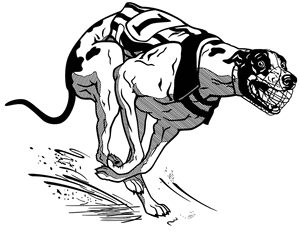 On course greyhound betting was once one of Britain’s favourite working class pastimes. In 1946 after WWII nearly 35 million people paid to go attend dog tracks in the UK. Legalisation of off course gambling however along with a lack of TV coverage and sponsorship saw the sport nearly die out in the UK.

Modern online betting sites actually became the saving grace of the sport in the UK. Streaming of races to audiences world-wide now means more people bet on UK greyhound races than ever before despite poor track attendances. The critical role of bookmakers in driving the sport has also resulted in plenty of greyhound deals and promotions including best odds guarantees, free bets and money back promotions. 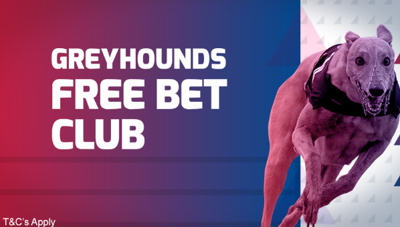 A common greyhound offer from Betfred is their free bet club. When available if you place a bet on 3 Greyhound races across two selected days (at odds of 1/2 or greater) they will give you a free bet to your average stake up to £10 to use on another day.

This is in addition to best price guarantee, streaming availability and lucky bonuses. Free tokens are generally valid 7 days to use on any sports. 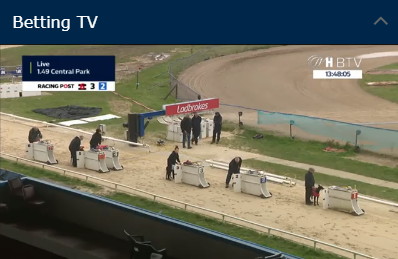 All UK and Irish meetings as well as those from the US can be viewed with coverage starting a couple of minutes before each race.

The quality of the stream is excellent and can be viewed full screen or in a smaller window alongside the betting console.

Lucky All Correct & One Correct Bonus 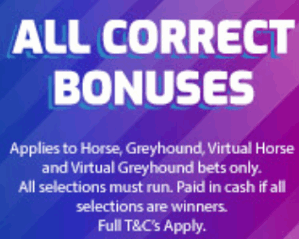 If you are a fan of a Lucky bet then there is no better bookie to place one with than the home of the Lucky 15, Betfred. Fred Done, one of the original founders of Betfred came up with the bet type in the first place.

Place a Lucky 15 on any greyhound racing with Betfred and if all four selections win you will get a 10% bonus on your winnings (no limit) in cash. Get all five right in a Lucky 31 and get 20% extra and get all six correct in a Lucky 63, get a 25% win boost.

Should that not be enough of a reason to bet on Lucky’s with Betfred they will also give you an enhancement should you only get on correct. Pick only 1 out of 4 correct in a Lucky 15 and get 3x the odds on that one pick, get 1 out of 5 in a Lucky 31 get 4x the price and 1 out of 6 in a Lucky 63 will get you 5x the initial odds. The offer is also available from sister brand Totesport. 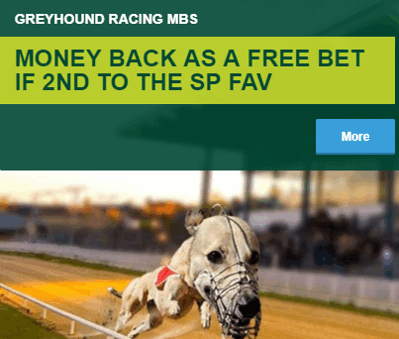 Back any Greyhound in Paddy Power’s selected daily afternoon meeting and if it comes second to the starting price favourite/co-favourite you will get free bet stake refund up to £25 (no minimum), valid for 7 days.

You can claim this in each and every race on the card. The meetings are generally from 11am until 2pm each day and include Swindon (Monday), Perry Barr (Tuesday), Newcastle (Wednesday), Sunderland (Thursday), Kinsley (Friday), Romford (Saturday) and Hove (Sunday).

If you bet on any horse racing, greyhound racing and harness / trotting single markets with Unibet they will give you a an odds boost on stakes up to £20, on up to three bets each and every day. There is no minimum bet and all winnings and extra winnings are cash, the boost can be applied from the betslip.

Uniboosts are only available as single bets; multiples are ineligible, you are not able to be used in conjunction with freebet tokens / balances.

This is a great offer if you are likely to bet on horse and greyhound races anyway, especially for non-elite racing where it is rare to find offers. Uniboosts refresh at midnight each day. 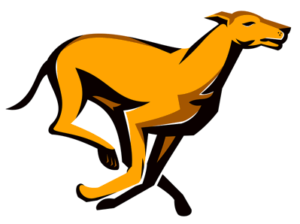 When you think of the various sports that exist in the world, it’s easy to see how some of them got started. Throw a balloon at someone’s feet, for example, and see them immediately kick it up in the air as an indication of what they’d do if you threw them something more substantial. Line up in your car alongside someone at a red light and you’ll sometimes saw a look in their eye that suggests they’re going to try to take off quicker than you, immediately triggering your more competitive nature and making you realise why Formula 1 ever got started. If you’re unfortunate enough be a in a pub when two people start throwing punches, it’s equally as simple to see where the idea for professional boxing came from.

When sports involve animals, however, it’s a little bit more tricky to understand how someone figured out how to turn it from recreation into something fun. After all, humans understand competitiveness and sportsmanship in a way that dogs and horses never can. Yet make them into sports someone did, with horse racing and greyhound racing having a degree of similarity in the manner in which they’re run. Obviously one major thing missing from one to the other is the jockey, so how do dogs know how to run around a track? Why don’t they all just stop and sniff each other’s bums like you imagine they’d do in a park? Read on here to find out a little bit more about the world of greyhound racing, including where it all began.

Perhaps somewhat unsurprisingly, the history of greyhound racing is difficult to nail down if you want to be fairly exact about it. We do know that paintings of dogs that look suspiciously like greyhounds have been found on materials that date back more than four thousand years, with the Ancient Egyptians being being huge lovers of them. The Pharaohs adored them not only as pets but also as talented hunters. In Arabian culture, greyhounds were treated with such respect that their birth was celebrated almost as much as the birth of a son, allowing them to sleep in their tends and ride on their camels with them. The Persian, Greek and Roman civilisations also treated them royally, with people in England banned from owning them as pets because they were considered so noble.

You’ll have noted, of course, that there’s so far been no mention of them being raced against each other. That’s because the sport’s origin isn’t absolutely clear, though it’s likely to have started in the eleventh century in England. We do know that coursing rules were first introduced during the reign of Queen Elizabeth the First, with points awarded during a race for form, speed and agility. The main aim back then was for them to catch the hare, which eventually resulting in the invention of the mechanical hare in 1876. That allowed up to six dogs to be raced against each other on a straight track, yet it didn’t do enough to capture the imagination of the crowd, which was far more interested in placing bets on the winner.

It wasn’t until the development of a lure that could be sent around an oval track that greyhound racing as a sport truly began to take off. That happened in 1912 when a man named O.P. Smith came up with the idea. It began life in America, with the first track opening up in 1919. Things didn’t take off in the UK for another seven years, when a track called Belle Vue opened in Manchester in the North of the country. The fact that the track opened in a working class district helped the sport immeasurably, given that it appealed to working class people no end. The sport caught on rapidly, with more and more tracks opening up around the country in the years that followed.

By 1929, around fourteen million people attended greyhound races in the UK on a weekly basis. That crept even higher to about sixteen million at the sport’s peak, with those people spread over more than one hundred and forty tracks around the country. That has dropped down to less than twenty-seven in recent years, as the sport has become less popular for those looking for a night out. Of those twenty-seven stadiums, twenty-two are registered and five are what as known as ‘independent’ stadia. There are also countless unlicensed stadiums, known as ‘Flapper Courses’, but it’s impossible to know exactly how many because they’re not properly regulated.

In terms of how greyhound racing works as a sport, it’s actually relatively simple. Long gone are the days of points being awarded according to a dog’s form or agility. Instead, it’s a simple matter of the greyhound that crosses the finish line before all of the others being declared the winner. The mechanical lure is sent whizzing around the track moments before the greyhounds are released from their trap, which is usually a container-type shape made up of metal bars. The greyhounds then race around the track in an attempt to catch the lure, which is often made to look like a hare in order to capture their attention.

Whereas in horse racing you’ll likely find that the number of horses taking part in an event differs from one race to the next, the same is not true of greyhound racing. Typically speaking, a greyhound track can handle a specific number of dogs, meaning that that number of greyhounds will be present for virtually all races. It’s often either five or six dogs that can race on a track, so that’s how many dogs you’ll see in each race unless there’s an injury to one of the competitors at the last moment. Even that’s not necessarily enough to stop the correct amount of greyhounds racing, however, with most tracks having reserve dogs that can be brought in if needs be.

Sometimes the racing can take place over hurdles, though the general manner in which it works remains the same. Given that there’s not much more to races than meets the eye, why is it a sport that is so appealing? There are numerous answers to that question, not least of which is that it’s a fun sport to bet on. The fact that the field is usually consistent makes it much easier for punters to feel as though they’re able to breakdown the competitors in a manner that allows them to get the feeling for which one is going to win. It also makes it simpler in terms of the types of bets that are on offer, with standardised wagers such as win, place and forecast bets tending to be the most common offered by the totalisator on track.

The other big reason that greyhound racing is so popular, and something that is as much a part of the sport as the lure whizzing around the track and the bookmakers on the side of it shouting out their odds, is the atmosphere you’ll encounter when you head to a stadium. It’s a thrilling sport, encouraging people to get involved at every turn. The result of that is that the sport is a family friendly one, being one that can be enjoyed by younger audiences as much as older ones. It’s also one that encourages big groups like stag dos and hen parties to rock up to, adding to that sense of a family atmosphere. All of that might not seem like it’s part of how the sport is played, but when something is such an important part of how the whole thing works it’s definitely worthy of a mention.

Just because greyhound racing is a relatively straightforward sport in terms of how it works, that doesn’t mean that it doesn’t lend itself to competition. There are numerous major events in the world of greyhound racing, often attached to specific stadia in the same way that horse races like the Grand National and Gold Cup will also be associated with Aintree and Cheltenham. Here’s a brief look at each of them: