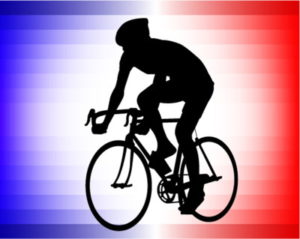 The Tour de France is unarguably the most famous cycling event outside of the Summer Olympics, possible even holding a greater cache than that. It took place for the first time in 1903 and involves a gruelling trek over more than 2,000 miles of France. There are 21 day-long stages that take place over 23 days in total, with the course starting at sea level and then going up into the mountains, challenging the riders in every imaginable way.

Despite its name, the race isn’t actually limited to France, with the initial stage haven’t begun in the likes of Germany, Monaco and the United Kingdom, with the aim being to allow a wider audience to get involved and give it a wider exposure. Contrary to the belief of those that only have a passing interest in racing, the Tour isn’t just about the winner. There are numerous categories for which awards are given, including the best young rider and the cyclist that performs best in the mountains.

This year the Tour De France starts in Copenhagen with the grand depart.  It is the first time the tour has visited Denmark, this was due to happen last year but obvious restrictions made it impossible. We, as usual, have done the trawling for you and have found the best deals below, further down you can find more about the tour.

One of the big reasons that the Tour is seen by many as being such a prestigious event is that it tests all of the main parts of a rider’s abilities. Obviously in order to do this the event is broken up into several stages that take place over the course of the competition. There are 21 stages in total, which take place over 23 days.

The event gets underway with what is known as a mass-start, the Grand Départ, in which all cyclists begin the race together. Riders need to finish within a certain time period in order to qualify for the next phase, which is usually the time of the winning rider plus a percentage of their time. The first three cyclists to finish are awarded a bonus of 10, 6 and 4 seconds.

There are a number of mass-start stages, with one traditionally for each of the flat, hilly and mountain stages. There are also normally a few time trials after the format was introduced in 1934. There’s usually a short one, known as a prologue, on the first day of the Tour to decide who gets to wear the yellow jersey. In recent times the last time trial has been the penultimate stage of the competition, though it has also been the final stage in the past.

Notable Stages Of The Tour

The most gruelling part of the Tour de France is unarguably the mountain stage, of which the Alpe d’Huez climb is one of the most notable. Mont Ventoux is perhaps the toughest section, mainly because of the harsh conditions there. The Col du Tourmalet, meanwhile, is the most climbed mountain in the Tour’s history.

Town’s want to be asked to host stages of the Tour because it brings them a degree of prestige and a lot of business. Obviously the most prestigious stages are the first and last, with the Grand Départ taking place in numerous different locations around Europe, but the final stage always in the same location: the Champs-Élysées in Paris. 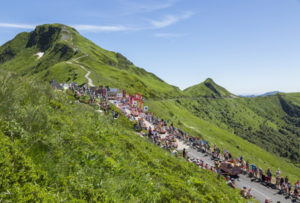 Obviously the stages are interesting, but it is in the classifications that riders get to either be declared victorious or ultimately fall short. The oldest classification is also the one that is both most sought after and the one that the casual viewer will know about: the general classification.

All of the stages on the Tour de France are timed to the finish, with each riders’ times compounded with those achieved on previous stages. The rider with the lowest average time after each stage is considered to be the race leader and gets the honour of wearing the yellow jersey on the next stage. As a sign of how important general classification is seen, winners of multiple classifications including this one will wear the yellow jersey above all others.

History Of The Tour de France

There surely can’t be many competitions as famous and beloved as the Tour de France that have been started because of a rivalry between newspapers, yet that is, in essence, exactly what happened. Le Vélo was the preeminent newspaper in Paris in the early part of the 20th century, selling more than 80,000 copies per day. Their coverage of the Dreyfus Affair was seen as in poor taste by some journalists working there, however, so they chose to leave and set up a rival paper.

That rival paper was entitled L’Auto and Henri Desgrange was installed as the editor. A part owner of the Parc des Princes velodrome, Desgrange was a keen cyclists, even going so far as to write books on the matter. He was looking for a hook for the paper that he’d been put in charge of, something that would win it readers over its rival, so he chose to poach a young journalist by the name of Géo Lefèvre with the specific aim of getting him to write about cycling.

A Tour To Win Readers 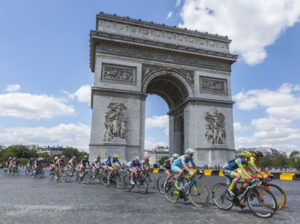 The newspaper’s sales were poor, so a crisis meeting was held towards the end of 1902 in which suggestions were mooted for how to rescue the failing enterprise. Given the popularity of coverage of long-distance cycling events for other publications, Lefèvre suggested that sales could be increased if the newspaper created a race that took place over six days on various roads around the country. Permission was sought of the man who financed the company, Victor Goddet, and he was all in favour of it; no major surprise considering he was part owner of the velodrome.

The initial plans for the race were for it to be a five-stage offering taking place between the 31st of May and the 5th of July, running from Paris to Lyon, Marseille, Bordeaux and Nantes before returning to Paris. When the idea of the Tour was published on the 19th of January 1903, however, the majority of cyclists immediately informed the organisers that it appeared to be too daunting and they wouldn’t be taking part.

The idea Desgrange came up with to rescue it was the same as has been used countless times since the dawn of time: money. He cut the Tour down to 19 days and said that riders who could average more than 20 kilometres-per-hour would receive a daily allowance. On top of that, the daily winner would be paid 3,000 francs and the overall winner would get 12,000 francs. It worked, with about 80 cyclists choosing to enter the competition, ranging from professionals to unemployed people hoping to do well enough to earn money to survive. 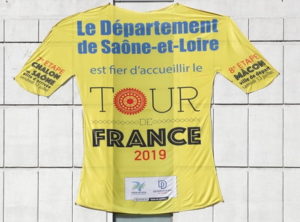 At 3.16pm on the 1st of July 1903, the first ever Tour de France began outside the Café Reveil-Matin in the village of Montgeron. By the fifth stage of the event only 24 riders remained, continuing around the country for the next couple of weeks until it reached its end outside the Restaurant du Père Auto. The riders that had made it until the end then went on into Paris in a ceremonial ride, with Maurice Garin being declared as the winner. It also resulted in relief for Desgrange, who had seen his newspaper’s circulation double as a result of the coverage of the race.

The first version of the Tour de France proved to be such a success that in 1904 it was incredibly popular, but with popularity also comes risks. The second iteration of the Tour was plagued by cheating and violence to the extent that the the newspaper printed a headline entitled ‘THE END’, declaring that the Tour would not take place again. Instead of killing it off, however, Desgrange chose to make it harder in order to weed out the time wasters. He increased it to 11 stages and moved the riding from the daytime instead of the night, so it would be easier to see when people were cheating.

Part of that included altering the starting times, mixing it up so that they ranged from 3am to 7.30am, which the French public found intriguing. With every passing year that the Tour was organised sales of the newspaper increased, with around a quarter of a million people buying the publication by 1908. That went up even further after the First World War, with over half a million people buying it in 1923. What made it all the sweeter for Desgrange and the journalists that had left Le Vélo was the fact that their former paper was shut down in 1904. 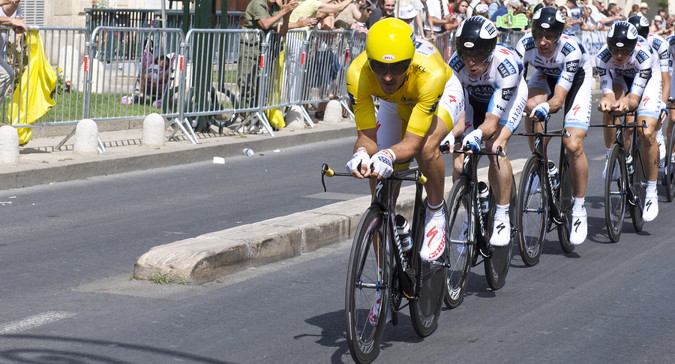 Whilst the race itself proved to remarkably popular with the public, Desgrange wasn’t convinced by the way in which the winner was decided. He toyed with numerous different methods in the event’s more formative years, from total accumulated time through to points being awarded on a daily basis, but nothing quite worked. One part of his tinkering involved changing where the race actually took place, moving it from the perimeter of the country to different areas that tested the riders.

Desgrange’s ultimate aim was to make the race as difficult a test as possible in order to help find the greatest cyclist around. This led to the 1910 introduction of the mountain phase of the race, heading into the Pyrenees and testing multiple disciplines of a rider’s ability. He tried to make it about the rider’s ability as much as possible, so when teams began to enter the race he initially forbade the idea of pacing until 1925 and he also provided the bikes that the riders would have to use. The Tour was suspended for the Second World War, with Desgrange dying in 1940. 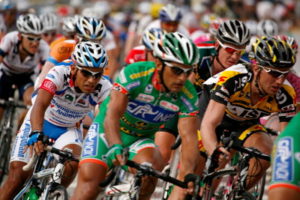 Prize money has been a key part of the Tour de France’s appeal from the moment that Desgrange decided to essentially try to bribe people to take part in the original race. Unsurprisingly, the amount of money awarded to the winner has increased with each passing year, though some interesting variations have been offered from time to time. Here’s an example of some unusual prizes given at times:

In 2021 Tadej Pogačar actually win €610,770 thanks to the fact he won several stages and had long periods as holding the yellow, white and polka dot jerseys together. In fact, all 160 riders get some money and there are also special awards along the way to win.

At the Col du Galibier stands a statue of Henri Desgrange, so the first rider over it is awarded the Souvenir Henri Desgrange. If the Tour doesn’t take in the Col du Galibier in a given year then the prize is awarded to the rider who makes it over the highest col that year instead. Jacques Goddet, who succeeded Desgrange as race organiser, also has a memorial, with his being at the summit of the Col du Tourmalet. Again, the rider who makes it over that first gets a similar award. 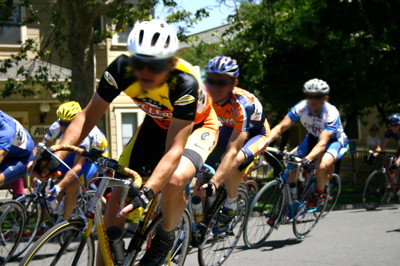 The Tour de France has been taking place since 1903, so it goes without saying that it’s thrown up some interesting moments over the years. It is one third of what are known as the Grand Tours, for example, sitting alongside the Giro d’Italia and the Vuelta a España. In 1944, the offices of L’Auto were shut by the Nazis, so Jacques Goddet started another newspaper named L’Équipe. Here are some other things of note: