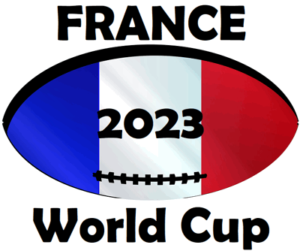 Rugby Union took a long time to sort itself out on the international stage and as a consequence the 2023 tournament is only the 10th ever Rugby World Cup.  Take one look at the event however and you would think it has existed forever, such is the passion, emotion and pride elicited by World Cup nations and fans.  Football, and many other sports, could do with taking a few pointers.

The 2023 World Cup comes from France and is the third time the nation has hosted the event, 2007 on its own and in 1991 with UK & Ireland.  Twenty teams will contest 47 ties over a period of 6 weeks culminating in the final on Saturday October 21st.

On this page we show you the latest and best free bet, money back and enhanced odds offers for the final of world cup.  You can find information about fixtures, stadiums, format, stats and history further down to.

In May 2017 the draw for the World Cup was made in Tokyo. The 12 teams that finished in the top 3 in their groups at the 2015 world cup qualify automatically. The eight other teams were defined by the end of 2018 through continental and intercontinental play-offs.

Numbers in brackets represent rankings at the time of the draw.

The tournament will run from Friday 8th September through to Saturday 21st October 2019 with 20 teams contesting 48 matches overall.  There are 40 pool matches as each team in each pool plays each other once, this means four games per team and ten games per pool, followed by four quarter finals, two semi finals, a third place play-off and the final.

During the pool stage teams can win 4 points for a win and two points for a draw.  In addition to this teams can earn an additional bonus point for achieving four or more tries in a game, this applies to both winning and losing teams should both teams score 4+.  Any team that loses by 7 or less points will also receive a bonus point.  The possible points scoring is therefore as follows:

The maximum number of points a team could achieve in four pool matches would be 20.  A team could also, in theory, lose all games and achieve 8 points.

Following the group stages the winner and runner-up from the same pool can not meet each other again until the final (see fixtures). 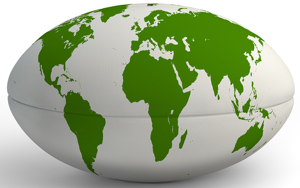 International Rugby games have been contested for longer than international Football matches yet it took until 1987 for the sport of Rugby Union to finally organise a World Cup.

The Six Nations, initially called the Home Nations Championship, began in 1883 between Wales, Scotland, Ireland and England; expanding to five nations when France joined in 1910.  International Rugby was also played at this time at the Olympic games, first appearing in 1900 it was however discontinued in 1924.

The idea of an international rugby event fell by the wayside for many decades.  This was partly to do with political tensions caused by World War II and the dissolution of the British Empire (of which many of the worlds top rugby nations were part of), but mainly due to a lack of appetite for a tournament from World Rugby (then called the International Rugby Board (IRB)).

Despite attempts to create a world rugby competition from the 1950’s onwards these were continually blocked by most unions within the IRB.

Following blocked attempts by Australia in 1983 and New Zealand in 1984, the two nations joined up for a final successful attempt was made 1985.  Delegates from France, South Africa, Australia and NZ all voted for a new World Cup, Scotland and Ireland voted against with England and Wales split.  The vote passed by 10-6 in favour and the first World Cup was jointly awarded to Australia and New Zealand. 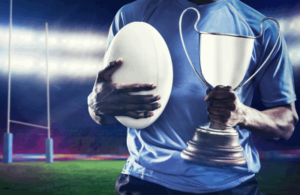 The first World Cup consisted of 32 matches between 16 teams over 4 weeks from 22nd May to 20th June 1987.  Seven IRB nations automatically took a spot (except for South Africa who were banned from international sport at this time due to Apartheid).  These were England, Ireland, Scotland, Wales, New Zealand, Australia and France.

There was no qualifying for the first event, the remaining 9 teams were invited: Argentina, Canada, Fiji, Italy, Japan, Romania, Tonga, USA and Zimbabwe.

Four pools of 4 teams competed in a round-robin group (2 points for win, 1 for a draw) followed by knockout quarter finals, semi finals and the final.  New Zealand beat France 29-9 in the final at Eden Park in Aukland to win the first ever Rugby world cup.

The 1991 World Cup was jointly held in Britain, France and Ireland and qualifying was introduced for the first time.  Eight places were given automatically to the quarter finalists from 1987 with the remaining 8 places were made up from 25 qualifiers.  England beat Australia 12-6 in the final at Twickenham watched by 56,208 fans.

South Africa participated in their first world cup in 1995, they also hosted the event.  South Africa won the event beating NZ in a final marred by food poisoning controversy by 15 points to 12.

The 1999 World Cup was expanded to 20 teams with 41 matches and was hosted by Wales.  Now only the top three teams from the last world cup along with the hosts received automatic entry.   No less than 65 nations competed in qualifying for the remaining 16 places.  Australia beat France 35-12 in the final following on from France’s shock victory over NZ in the semi-finals. 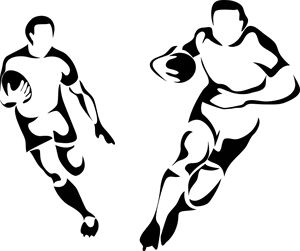 The 2003 World Cup in Australia is fondly remembered by English fans.  The final game was due to go to sudden death before Jonny Wilkinson’s drop goal with 21 seconds left won the tournament for England, who became the first team to lift the World Cup twice.  2003 saw the number of teams in each pool increase to 5 and the number of games increase to 48.  It has remained the same since.

England were defeated finalists in 2007, with South Africa winning their second title 15-6 in the Stade de France.

Following a long wait the All Blacks finally lived up to their reputation in 2011 winning the tournament as hosts, beating France in a tight low scoring final by 8 points to 7.

New Zealand went on to become the first nation to win consecutive world cups in 2015 beating rivals Australia 34 – 17.  The World Cup, hosted by England, became the first event to date in which the hosts have failed to reach the quarter-finals, although I suspect this could happen again in 2019 when Japan host the event. 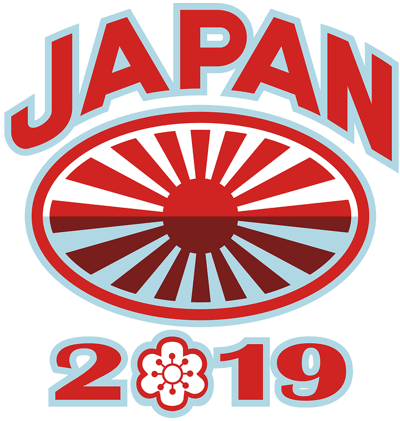 Japan were the first non-classical Rugby nation to host the world cup.  Having failed to make it out of the pool stages in the previous 8 world cups, chalking up just three wins in all that time, they made their nation proud by topping Pool A ahead of Ireland to make the Quarter-Finals where they were beaten by South Africa.

The shock of the tournament was England beating New Zealand in the semi-finals 19-7 in one of the best displays the team has ever produced.  They were unable to convert this into a World Cup win, however, as South Africa produced a superb display in the final to beat England 32-12 and match New Zealand with three World Cup titles.

Whether France perform or not is unlikely to concern many at the 2023 event.  All people really want to know is can New Zealand come back to the top of the world and claim their fourth title, or indeed can South Africa surpass them and add their own fourth?

Will England or Australia win two or three cups respectively or will Ireland, Wales or Scotland win a World Cup for the first time? If France are ever going to win it it seems likely it would be on home soil and could be a good outside bet.

One thing we might expect is for more tier 2 teams to get further in the competition after Japan’s heroics at the 2019 tournament.  The gap between the top teams and the rest is evidently closing and this will hopefully produce a highly competitive competition. 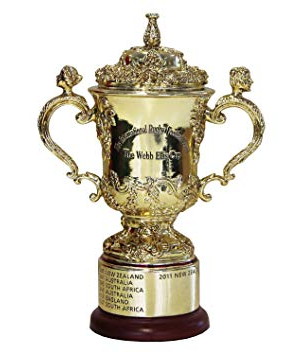 The world cup trophy is named after William Webb Ellis, the proposed inventor of the modern game of Rugby which he played at Rugby school in the 1820’s.

He supposedly picked up the ball in a game of football and ran with it inaugurating the game of Rugby.

This is most likely a myth and there is no real evidence to support it but it is a good tale and a fair name to use for the World Cup trophy.

It is 38cm tall and is made of silver guilded on top in gold.  The cup has two handles with a scroll design, one supporting the head of Satyr and the other the head of a nymph, both from Greek mythology.