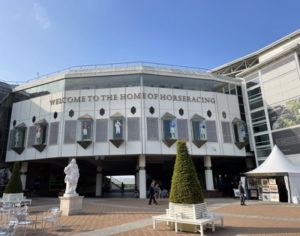 The 1000 and 2000 Guineas at Newmarket still stand as two of the oldest and most prestigious flat races in the UK. These races are the first two of the 5 ‘classic’ races during the flat season, both races are over 200 years old and represent the first major test of the season for three-year-old thoroughbreds. Although the flat season usually starts three weeks prior to the Guineas many still see these races as a marker for the beginning of the season and an early benchmark for the year’s top runners.

The races are so named because of the initial prize money provided for winning the race being 1000 and 2000 Guineas (1 Guinea is 21 shilling or £1.05 in modern money). This was a huge amount of money in the early 1800’s but compared to today’s prize money of nearly £500,000 in both races it is small change. As one of the classics expect some cracking bookmaker offers for new and existing customers. We will cover the best value deals on this page. Further down you will also find details of the races, history and more. 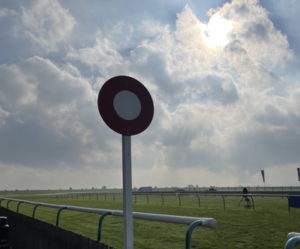 The 2000 Guineas is the first of the five British classic flat races and is run in late April or early May each year on or around the bank holiday weekend.  The race is open to three-year-old colts (male under 4) and fillies (female under 4) and is run over a distance of 1 mile (1609m / 8 furlongs), the race is also the first of the triple crown including the Epsom Derby and St Leger.  The race is run on the Rowley Mile, a straight track that goes back to the time when Newmarket was in fact two courses (see Newmarket history).

The 2000 Guineas was established in 1809 through the Jockey Club directed by Sir Charles Banbury who had previously founded Derby, another classic race.  The race was named based on the prize fund for winning, at the time this was 2000 Guineas equal to around £2100 in modern money.

The race grew in prestige over the next 50 years and by the middle of the 1860s was regarded as one of the five best races for this age group, hence the 5 British classics.  Initially, as is suggested by name, the 2000 guineas carried a large prize fund than the 1000 Guineas however since the turn of the millennium the prize pools have been roughly equal.  Currently this stands at around £500,000 with over £283,500 for first place.

The 2000 Guineas has a series of trail races that define the final field, for example the Craven Stakes, a group 3 race held at Newmarket in April.  The 2000 Guineas race itself in fact serves as a trail race for the Espom Derby.

A virtually identical race to the 2000 Guineas except that this race is restricted to three-year-old fillies only.  It is run on exactly the same course and over the same distance as it older namesake, 1 mile at Newmarket, the day after.  This represents the second of the five British classics and also the first leg of the fillies triple crown that also includes the Oaks and St Leger.

The 1000 Guineas was also established by Charles Banbury and the Jockey Club five years later than the older 2000 Guineas in 1814.   Despite prize money or this race being less for 185 years since 2000 the prize funds for both races have been very similar.  In fact, in recent years the money available for the 1000 Guineas exceeds that of the 2000 Guineas.  The prize fund is around £500,000 with about £283,500 for the winner.

The 1000 Guineas is also fed by trail races including the Fred Darling Stakes and Nell Gwyn Stakes, both run at Newmarket in April. 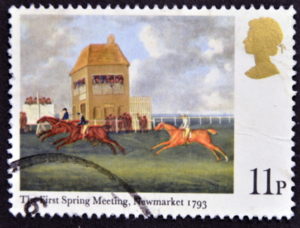 Newmarket itself is a historic market town and no market town is complete without a traditional British racecourse.  Being in Suffolk, a very level part of South East England, this is a flat racecourse.

The history of the racecourse goes back to the mid-1700’s where King Charles II and future king James II were known to attend races.  At this time the two big races were the ‘Kings Plate’ and the ‘Town Plate’ worth around 50 Guineas each.  Over the years other plates and races were added and by 1770 there were 7 major meetings a year. 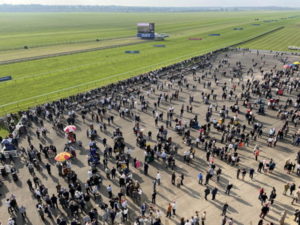 Originally Newmarket was in fact two courses, named the Rowley Mile and the July Course.  The Rowley mile is actually 1 mile and 2 furlongs (~2km) long and although it contains a couple of slight undulations is pretty much straight.  The last 400 meters consist of 200m downhill followed by 200m uphill creating the characteristic dip, this is the course on which both Guineas races are run.  The Rowley mile is also used by light aircraft that land along a grass strip beside the course, formerly the RAF used this strip when it was RAF Newmarket in the second world war.

The July course is used, as the name suggests, for summer meetings in July.  This also has a one-mile-long straight referred to as the Bunbury Mile, it is characterised by a long gradual downhill slope with an uphill final 8th of a mile.

There are two English Triple Crowns in Horse Racing, the triple crown and the fillies triple crown.   Well, perhaps three if you count the Stayers Triple Crown which is made up of the Gold Cup at Ascot, the Goodwood Cup and the Donacaster Cup.  Frankie Dettori won that one in 2019 with Stradivarius, the first since 1995 and only the 8th since 1879.

For the purposes of what we are talking about here however we will focus on the famous two.

The Triple Crown is made up of the 2000 Guineas, Epsom Derby and St Leger and was coined when in 1853 a horse named West Australia won the first treble.

Although the feat was repeated 12 times between the first win and the end of World War I, in the 100+ years since the treble has only been completed twice, by Barham in 1935 and Nijinsky in 1970, the last horse to win it.

The issue is not caused by horses no longer being able to win the triple crown but because in the modern day most elite runners do not enter all 3 races.  This is due largely to the distances involved, the 2000 Guineas is run over one mile, the Derby just over one and half miles and the St Leger over one and 3/4 miles.

Many horses these days that are bred for speed are not entered into the longer St Leger as it is felt this may effect the stud values of horses that tend to be valued for speed over stamina.

This is not to say it will never happen again but if it did a horse would have to be specially trained to do so.  Saying all of that it was fairly recently in 2012 that Camelot came very close by winning the 2000 Guineas and the Derby and came second in the St Leger.  The last horse to come that close without winning the crown was in 1931, so never say never.

Despite naturally being dominated by Stallions Mares can enter the triple crown.  The only mare to come close to winning it was Shotover in 1882 who won the 2000 Guineas and Derby but came third in the St Leger.

The Fillies Triple Crown is of course only for fillies and is made up of the 1000 Guineas, Epsom Oaks and St Leger.  For a long time it was not really recognised over the main crown as elite fillies would tend to enter the 2000 Guineas or Derby instead.  This is now not the case and so is treated with equal esteem.

Although the fillies crown has been won more recently than the other version, by Oh So Sharp in 1985, it is still unlikely we would see a modern winner unless specially trained.

The crown was first won in 1868 by Formosa, who also came in a dead heat in the 2000 Guineas in the same year.  Since then it has been won on eight further occasions, but only three times in the last century.

Interestingly one of the winners of the fillies triple crown was Pretty Polly, after which a race at the festival is name, the Pretty Polly Stakes, a listed race for 3 year old fillies on the Sunday.  She won 22 of her 24 races and came second in the other two between 1903 and 1906 earning £37,600 along the way, a tidy sum in those days.

I wouldn’t go betting on a Triple Crown winner any time soon though!