When we consider sports stars, we usually think of them on the pitch, course or court, playing their preferred sport. Whether that be football, tennis, golf, baseball, badminton, darts or whatever, we all have our sports heroes, right? It’s not often the case that we consider those sports stars who have done time behind bars – or those who are actually still serving time for committing a crime. Potentially, there are sportsmen and women who are currently in jail that you didn’t know about, too.

And those are the sportspeople we will be looking at today. We intend to dig deep into their offences, how long they’re serving and whether or not they have a chance of ever coming out of prison. Sports can often provide highly competitive events and exciting tournaments, but it is also the case that some players have taken the law into their own hands and committed crimes that they’ve been caught for in the end. Perhaps some of them didn’t even know they were committing a crime when involved. Whatever the case may be, here is a look at some sports stars who have been or are behind bars. 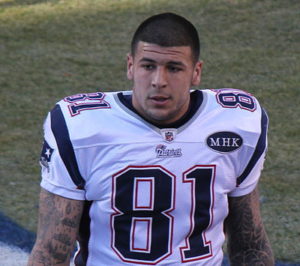 Born in Bristol, Connecticut in 1989, Aaron Hernandez was the son of a father of Puerto Rican descent and a mother of Italian descent. Experiencing constant fighting in the household, Hernandez also saw both of his parents arrested and involved in crime throughout their lives. Aaron and his older brother D.J. were often pushed to excel in sports by their father, who would be abusive to both children as well as their mother. Hernandez became involved in criminal activity himself following his father’s death and mother’s new relationship with an older cousin’s ex-husband.

According to D.J., Hernandez was sexually molested by a teenage boy in his babysitter’s house. Despite everything, he went on to excel in American football (as well as have skills in basketball and track). He played for the Bristol Rams football team at Bristol Central High School before playing for the University of Florida. He was allowed to graduate more than a semester early so that he could put all of his focus on playing football. And even though a failed drug test during his time with the Florida Gators put him on the bench for the season opener of his sophomore year, he went on to a professional career with the New England Patriots, starting in 2010. However, several teams had already passed on drafting him because “he was a problem”.

Various issues plagued his career off-the-field, including multiple failed drugs tests and character concerns. He was not popular with his fellow teammates though, and despite one or two trying to keep him on the straight and narrow, he was deemed “a lot to handle”. A number of run-ins with the law during his lifetime also hindered the sportsman. This included bar fights, a double shooting incident, a double homicide, DUIs and more.

Yet it was the murder of Odin Lloyd that sent Hernandez to prison. Lloyd’s body was found with multiple gunshot wounds to the back and chest about a mile from Hernandez’s house. Hernandez was arrested and charged with murder on June 26, 2013, and 90 minutes after his arrest, was released by the Patriots. In 2015, Hernandez was convicted of first-degree murder and weapons charges, being sentenced to life in prison without possibility of parole. Two years later, Hernandez was found dead in his prison cell after apparently hanging himself with a bedsheet. 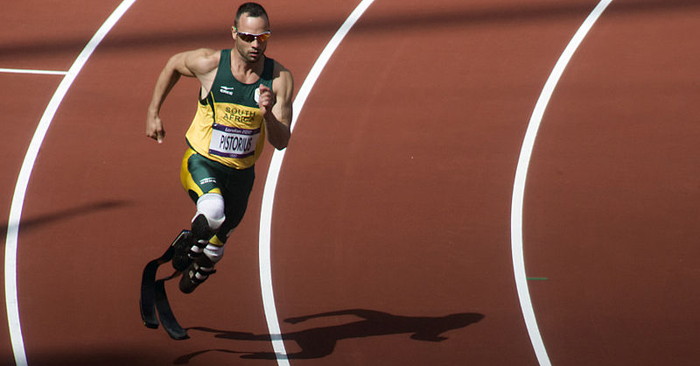 Oscar Leonard Carl Pistorius, also known as Blade Runner, is a South African former professional sprinter. Born missing the outside of both of his feet and fibulae, he had both of his feet amputated when he was 11 months old. Despite excelling at rugby union, water polo, Olympic wrestling and tennis at Pretoria Boys High School, Pistorius was introduced to running in January 2004 after a serious rugby knee injury had sidelined him. He had racing blades fitted by South African prosthetist Francois van der Watt before having some fitted by the Icelandic company Össur.

Pistorius became known as the Blade Runner and “the fastest man on no legs” during his sprinting career, competing in the 2004 Summer Paralympics in Athens, finishing in third overall in the T44 100-metre event. He was also targeted by negative comments when some deemed that his prosthetic limbs gave him an advantage over other runners with natural ankles and feet. He went on to compete at the 2008 Summer Paralympics in Beijing, as well as the 2012 Summer Paralympics in London.

However, in 2013, it was found that Pistorius had shot and killed South African model and paralegal Reeva Steenkamp at his home in Pretoria. He admitted to shooting her four times, causing her death, but claimed that he had mistaken her for an intruder in his home. By September 12, 2014, Pistorius was found guilty of culpable homicide and one fire-arm related charge. A prison sentence of a maximum of five years was handed out to him. Pistorius was then released on home arrest after serving one-sixth of his prison term, being expected to perform community service as part of the remaining sentence.

An appeal was then submitted on the culpable homicide verdict of the original trial. On November 3, 2015, the Supreme Court of Appeal in Bloemfontein made a decision that Pistorius was guilty of murder, and he was re-sentenced to six years in prison in 2016. This sentence was then increased to 13 years behind bars. 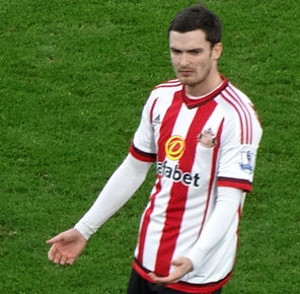 Born in Sunderland and brought up in Easington, Country Durham, Adam Johnson was taken in by Middlesbrough’s football youth academy at the age of 12. He and his team went on to win the 2003-04 FA Youth Cup and he made his senior debut at the age of 17 in March 2005.

It was six months later that Johnson made his Premier League debut for Middlesbrough, deputising for Stewart Downing in a 2-1 home win against Arsenal. He then spent much of the 2005-06 season on the bench as a substitute, but in May 2006, he scored his first goal for his team in an away match against Bolton Wanderers. A bid was then put in for Johnson from Manchester City, and he was signed to the team in February of 2010 on a four-and-a-half-year contract. However, he only stayed with City for two years before signing to his hometown team of Sunderland in August 2012 for £10 million.

It was in 2014 that things started to go south for Johnson, though. In December of that year, he began communicating with a 15-year-old girl on social media while his partner at the time, Stacey Flounders, was pregnant with their child. One month later, Johnson met with the girl in his Range Rover and signed two Sunderland shirts for her. Almost two weeks later, they met up again and Johnson kissed the girl. In March, he was arrested by Durham Police on suspicion of having sexual activity with an underage girl. In March 2016, he was found guilty of one count of sexual activity with a child and sentenced to six years in prison. He was also ordered to pay £50,000 of the prosecution’s legal fees of £67,132. He was released in March 2019 after serving half of his sentence.

Sunderland immediately suspended Johnson after his arrest but allowed him to return throughout the proceeding 11 months before his trial ended. He was later sacked by his hometown team and his endorsement by Adidas was also terminated. Johnson has not played football professionally since. 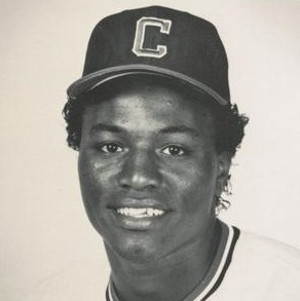 This one may go back in time a little bit, but the jail sentence in question is still playing out today. Melvin Hall Jr. is a former professional baseball player who represented various Major League Baseball (MLB) clubs, including the Chicago Cubs, Cleveland Indians and New York Yankees. He also played in Japan between 1993 and 1995. Debuting for the Cubs in 1981, Hall hit 17 home runs in 112 games in his first full Major League season of 1983.

Hall played throughout the proceeding years and was frequently a top player for the various teams noted, as well as the San Francisco Giants. Yet, in 1996, he registered just three singles in 25 games for the Giants and was released after just a month before retiring shortly afterwards. He wasn’t heard of much in the proceeding years until an incident in Texas in 2007.

Arrested on two counts of sexual assault after police in the state received a report from a woman who stated that she had been assaulted in March 1999 when she was under the age of 17, Hall was investigated. A second victim under the age of 14 was also identified during this time. The former baseball player would go on to be convicted of three counts of sexual assault on a child and two counts of indecency with a child. His sentence would be handed out on June 17, 2009, when he was given 45 years in prison. Of that sentence, he must serve at least 22 years and four months before even being considered for parole. 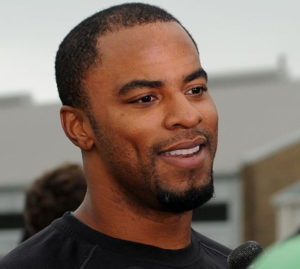 Perhaps one of the most high-profile professional athletes to be serving time at the moment is former American football player Darren Sharper. After playing college football at William & Mary in Williamsburg, Virginia, Sharper went on to be selected in the second round of the 1997 NFL Draft, becoming the safety for the Green Bay Packers. He spent eight seasons with the Wisconsin team, before being drafted to the Minnesota Vikings and then his final two years with the New Orleans Saints. Sharper would go on to become recognised as one of the NFL’s top defensive backs during his career, ranking sixth in all-time interceptions with a tally of 63.

Following a 14-year career in the NFL (and workouts with the Denver Broncos, New England Patriots and Green Bay Packers without a contract offer), Sharper announced his retirement. Not long after that time, his woes with the law began.

On March 18, 2011, two women came forward and alleged that Sharper had potentially sexually assaulted them. Both claimed to have passed out at the sportsman’s condo and woken up to find their underwear missing. The events allegedly occurred in Miami during spring break, with the two women visiting from the University of Georgia. A mutual friend had brought the women to Sharper’s condo, whom they reported the incident to and then drove them to the hospital where they underwent a rape examination. The Miami Beach Police Department closed the investigation after five days.

On February 2, 2013, it was reported that Sharper allegedly helped to drug a woman who was working as a model at a pre-Super Bowl party in New Orleans. She was subsequently raped by a friend of Sharper’s, Brandon Licciardi. Sharper then allegedly raped a woman in New Orleans on August 31 of the same year. This routine of drugging and raping women continued throughout 2013 and into 2014 in various states.

Sharper was arrested in Los Angeles in 2014 on two separate counts of sexual assault. He was also investigated by Louisiana state and federal, Arizona state and Nevada state. He pleaded guilty to charges brought against him in California, Arizona, Nevada and Louisiana, and received the following prison sentences which will run concurrently:

Once out of prison, Sharper will also have to register as a sex offender. On February 28, 2014, Sharper was officially fired from the NFL Network for his connection to the arrest for aggravated rape. He had worked briefly as an analyst for WWL-TV prior to taking the position with the Network. In April of 2015, he was removed from the William & Mary Athletics Hall of Fame.