Political Use Of Sports 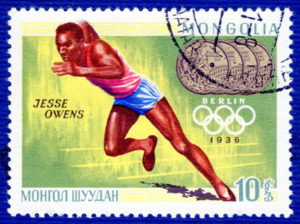 Sports have long been an incredibly popular pastime. As a result, the temptation for politicians to use one sport or another for a political gain has virtually always existed. We might like to pretend that there is no link between sports and politics, but there is and there always has been. Next time that you go to a football match, keep an eye out for people collecting food for the local food bank. The very existence of food banks is a political choice, so it is impossible to separate the politics of them from the people that do the collecting.

The reality is that sport has been used to make political points time and time again over the years, sometimes by the politicians and sometimes by the people playing the sports. It is inevitable that politics and sports are intertwined, given that, in many instances, the very fact that sports exist is thanks to political decisions. In the United Kingdom, for example, local councils can decide how to invest money into different sports at the grass roots level, which will dictate whether or not people tend to take part in the sport in the months and years that follow. 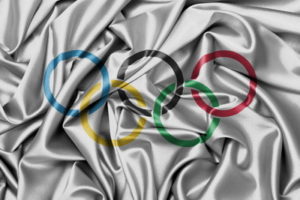 Around the world, there are many who believe that sport should remain apolitical and neutral wherever possible. In reality, sports and politics are intertwined and it is impossible for most sports to operate without at least a passing nod to the world in which they exist. In May of 2021, a webinar was hosted by the U.S. Department of State’s Sports Diplomacy Division as part of the World Learning’s International Sports Programming Initiative. In it, viewpoints were put across from people from around the world about the subject of sports and politics.

A journalist from Malaysia, Haresh Deol, noted how the focus is often on elite sports, but that mass sports is needed before the elite versions of it can develop. As a result, he pointed out that politicians have long used the mass appeal of sports in order to garner support. Promises for improved infrastructure around sports is common, whilst India has weaponised cricket against Pakistan in order to isolate the country. Even how a country copes with losing at the Olympics can be politicised, as the French found after their own poor performance at the 1960 Olympics, which led to the creation of a nationwide athletics programme.

Speaking more broadly about sport and politics is important, but in order to truly draw the line from sport to politics it is important to note the specific occasions on which they have mixed. There are examples such as when the National Basketball Association entered a three-day hiatus in August of 2020, which resulted in a decision to use arenas and stadiums as a place to allow people to vote in-person for the American election, but that is still somewhat abstract. Here are the more specific examples of sports and politics going hand-in-hand: 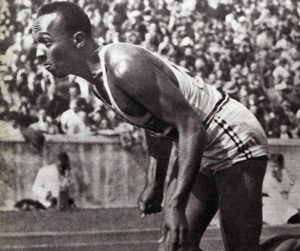 Perhaps no political move by a sports person is as famous as that of Jesse Owens. The sprint and long jump specialist headed to the Berlin Olympics in 1936 when it was being hosted by Adolph Hitler’s Germany. As a black man, Owens was already putting himself in harms way by the very nature of his decision to travel to Germany, with Walter Francis White, the Secretary of the National Association for the Advancement of Coloured People, writing a letter to him to dissuade him from going but never actually sending it.

He was persuaded by the NAACP to released a statement that said, “If there are minorities in Germany who are being discriminated against, the United States should withdraw from the 1936 Olympics,” but he refused to do what the actually wanted, which was not to travel at all. Instead, he arrived at the Olympic Stadium to a crowd shouting, “Wo ist Jesse?”, which meant ‘Where is Jesse?” He went to Germany with the aim of debunking Hitler’s idea of the Aryan race being superior, which he did in style.

Owens won the 100 metre dash on the third of August, the long jump on the fourth and the 200 metre sprint on the fifth. Even more impressively, he wasn’t done there, winning the 4 x 100 metre sprint relay after the American head coach decided to replace Marty Glickman and Sam Stoller with him and Ralph Metcalfe. His success caused Hitler to refuse to congratulate any medallists, after initially congratulating only the Germany winners. Whilst not a deliberate political statement, there is no question that Owens’ success caused problems for Hitler’s desire to show the world German superiority. 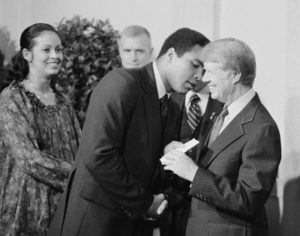 Born Cassius Marcellus Clay Junior, Muhammad Ali would go on to be considered one of the greatest boxers of all time. His very name was a political statement, however, given that he gave up his ‘slave name’ in order to take on the moniker that he would become famous by. It wasn’t the only political move that Ali opted for during his career either. In 1966, for example, he refused to be drafted into the military on account of both his religious beliefs and the fact that he was morally opposed to the Vietnman War; a decision that saw him stripped of his boxing titles.

Ali was one of the world’s most famous Muslims at the height of his career, focusing on the religion’s practice of charity and good deeds. There is an estimation that he helped to feed in excess of 22 million people across the world, which is a political act in itself. In 1978, he took part in The Longest Walk, which was a protest march that supported Native American rights. Two years later and the then President, Jimmy Carter, recruited him to carry out a diplomatic mission to Africa to persuade various African governments to boycott the Moscow Olympics.

Ali wasn’t shy of being involved in politics throughout his career, not just when making statements of his own. In 1984, for example, he announced that he would be supporting Ronald Reagan in his re-election campaign. A year later, he travelled to Israel in order to ask for Muslim prisoners to be released. Years later, he went to Iraq and met with Saddam Hussein in order to negotiate for their release of American hostages, succeeding by promising the dictator that he would give America an ‘honest account of Iraq’ in exchange for their release. 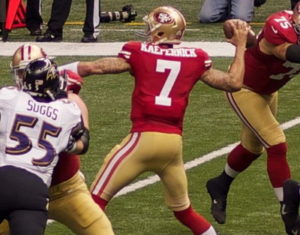 If Jesse Owens is one of the most famous sports people because of his success at the Berlin Olympics in 1936, Colin Kaepernick may just be the modern equivalent, though for entirely different reasons. Born in Milwaukee, Wisconsin in 1987, he became the starting quarterback for his youth American football team when he was aged just nine. His ability continued to see him do well, being named the Most Valuable Player of the Central California Conference in his senior year. He was also a talented basketball player, scoring 34 points in a playoff for the All-CCC competition.

In 2011, Kaepernick was signed to the San Francisco 49ers as part of that season’s draft, initially being used sparingly by the NFL side. As the season developed, he began to be used more and more breaking records in certain matches. His performances grew to the point that he became an integral part of the 49ers roster, but when a new coach arrived in the 2016 off-season and told him he wasn’t going to be part of the team, he became a free agent. The reason all of this matters is because Kaepernick was a successful NFL player who would have been a strong addition to any team.

It is also impossible to ignore the fact that Kaepernick became more politically active in the build-up to the 2016 season, commentating on the fatal shootings of black people and the acquittal of the officers that shot them. He chose to take a knee during the national anthem for the 49ers final pre-season game, stating, “I am not going to stand up to show pride in a flag for a country that oppresses black people and people of color.” By December 2021, Kaepernick had still not gained employment with another NFL side on account of his continued silent protests. 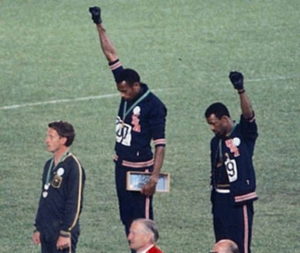 There are few photographs that best represent the link between politics and sport quite like that taken of Tommie Smith and John Carlos showing the raised fist on the podium after winning the 200 metres during the 1968 Summer Olympics. Both athletes were also wearing black gloves on their raised fists, as well as Olympic Project for Human Rights badges. John Carlos and Tommie Smith, both black athletes, wore black socks for the medal ceremony, which were designed to represent the issue of black poverty, as they collected their bronze and gold medals, respectively.

Though many in the crowd booed the two athletes in the wake of the ceremony, it didn’t discourage them from carrying out a similar silent protest as they heard the national anthem being played. The bowed their heads and raised their gloved hands in a salute and a protest against racial discrimination against black people in the US. Speaking after the event, Smith said, “If I win I am an American, not a black American. But if I did something bad then they would say ‘a Negro’. We are black and we are proud of being black.”

For years, many people thought that the Australian on the podium with them, Peter Norman, was against their protest because he did not raise his fist in solidarity. In reality, he was also wearing an OPHR badge and was fully supportive of their cause. Indeed, he was criticised by conservatives in Australia and was not sent to the 1972 Olympic Games in spite of the fact that he made the qualifying time on several occasions. In fact, both Smith and Carlos would have been wearing black gloves on both hands but Carlos forgot to being his, so it was Norman who suggested that they wear one each of Smiths. 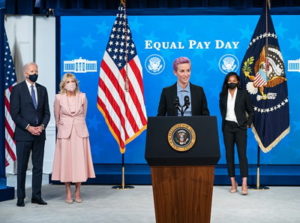 You will no doubt notice that there have been no women mentioned in this piece so far, which is largely down to the fact that women’s sport hasn’t been supported anywhere near as much as men’s sport over the years. Whilst this is in itself quite political, it is worth drawing attention to the political act of one person specifically because of their no-holds-barred approach to raising issues. Megan Rapinoe was the spearhead of the US Women’s Football Team, matching her on-field performances with an off-field firebrand nature.

Eight-By-Eight magazine had interviewed her at the end of the Women’s World Cup, asking her whether the team intended to visit Donald Trump’s White House if they won. She was firm in her denial of the chance that they would, which unsurprisingly provoked the then-American President into a response. Trump himself had long been a user of sports to pick up points in the culture war, which was part of the reason why Rapinoe disliked him so much. Indeed, the lesbian Rapinoe had often been used by Conservatives to provoke their base into anti-LGBT arguments.

Trump tweeted that she should ‘WIN first before she TALKS’, which Rapinoe duly did. She scored pivotal goals in her side’s final matches, earning herself the Golden Boot as well as the Golden Ball and leading the US women’s team to a successful defence of their World Cup title. It is hardly a surprise that an out-spoken, gay female sports person should annoy the right-wing in America, but Rapinoe has never shied from the fight. She has used her position as a well-known, successful footballer to draw attention to causes that she believes in, which is exactly how sports and politics should interact.