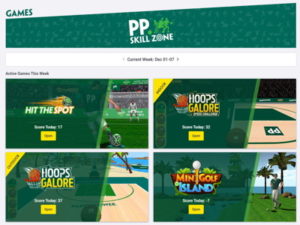 There are few betting companies that do free to play games as good as Paddy Power and this was evident with Skill Zone, which offered customers the ability to play skill games daily from which they could earn free bets and power ups.  The games varied each week with the idea being to score as many points as possible on the games during the week to rise up the leader board and earn rewards.

Paddy Power decided to discontinue Skill Zone from Wednesday 15th December 2021 with the last game week being 8th-14th December.  This has left many regular players who enjoyed logging in daily to play the games disappointed.

Users have been encouraged to use up any remaining ‘gold’ within the game before closure as this can not be converted to other rewards.

Four games were available each day for one week (Wednesday to Tuesday) and could be played once per day.  Each week some games were inactivated and others became active.  Hit The Spot and Hoops Galore were the most commonly featured games.

Each individual game had a leader board and then there was a master leader board that your two highest scores from the individual games could contribute to.  The winner of the master leader board could originally win £200 in free bets, this was then more recently dropped to £100 in free bets (and in a way was a sign that the game was being phased out).  Prizes were then tiered down but if you finished between 450-8000 you would get a £1 free bet (recently dropped to £0.50) and between 20,000 and 8,001 a free power up.

There was also a monthly challenge that would earn users gold to spend on the enhancements mentioned earlier.  Players particularly enjoyed the typical Paddy humour peppered through the games, such as comments that would appear if you missed a shot, e.g. in Hit The Spot a missed goal would see a message like ‘Emile Heskey Is In the Building’ or similar.

Why Is Skill Zone Closed? 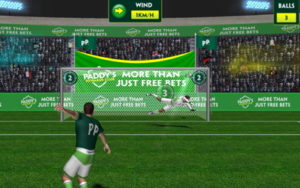 Given it was a popular free game with users and it encouraged customers to visit the site or app once a day it seems surprising that PP would close Skill Zone as it is clearly successful with some users.  Still, there were some issues with Skill Zone that likely lead to the decision.

Firstly, although players that played were loyal to the game in reality the number of players only amounted to a fraction of Paddy Power’s overall customer base.  The effort to maintain Skill Zone for a few 1000 people may be seen as uneconomical.  It also ultimately meant that the same players were winning free bets every week.

Secondly, it was fairly clear that some people knew how to play these games better than others, perhaps using nefarious means to play.  From the scores at the top of the leader boards it was obvious that for some games there were ways to win the game other than skill.  For example, the top score in mini-golf island was simply impossible to achieve for a normal player through skill alone, you had to know something about the workings of the game.  The top scorers in the quiz also had scores that seemed humanly impossible.

This meant that a lot of the same players were winning the bigger rewards each week and that removed to competitiveness from Skill Zone.  In the time that I played I noticed it was easier and easier to get onto the leader board lowest free bet positions, suggesting many people had stopped playing it.

Will Skill Zone Come Back? 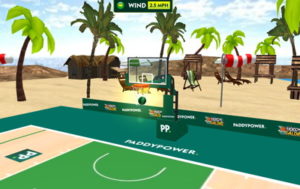 Paddy Power are known for innovating when it comes to engaging customers so no doubt they have something in the pipeline to replace Skill Zone.  The Skill Zone itself will probably come back in a similar format at some point.  Part of why it is being retired is it had been running a long time and perhaps became a bit stale.  There is nothing better than relaunching something to garner attention again.

In the meantime for those that really liked Skill Zone there really isn’t anything like it available with other betting sites and so for the time being it means you have to do without your mini-golf and virtual basketball.