How Often Do Goalkeepers Score Goals In Football? 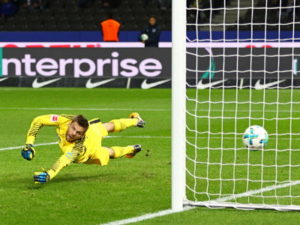 There’s a phenomenon in football when a central defender strolls out of the defensive third and up the pitch with the ball at their feet and opposition players have no idea how to react. They look at the centre-back as if they are a horse that has been let loose onto the pitch, clueless about whose job it is to pick them up. If that’s the response to defenders, imagine how opposition teams feel when a goalkeeper makes their way forward.

It is a rare occurrence, of course, given the extent to which they leave their goal entirely exposed and are therefore susceptible to a goal scored against them on the counter-attack. Indeed, it really only tends to happen when their team wins a corner or set-piece towards the end of a must-win game and the manager decides that they could make the difference. With that in mind, then, just how often do goalkeepers score? 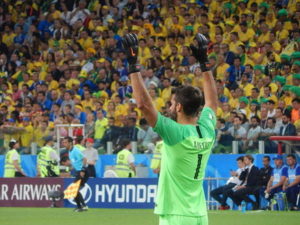 Let’s be blunt about this, goalkeepers do not score very often. There are a myriad of reasons for this, but the main one is that they spend the vast majority of their careers far away from the opposition goal. It’s not like a goalkeeper is likely to get on the end of a long ball or be in and around the box when crosses come in. If a goalkeeper scores then it is usually a complete fluke of circumstance rather than an intentional plan.

In fact, it is such a rare occurrence that when it does happen it becomes headline news and most people in sport talks about it. As an example of this, when Alisson Becker scored a goal for Liverpool against West Bromwich Albion in May of 2021, he became just the sixth goalkeeper to score for any side in the Premier League era, as well as being the first ever goalkeeper to score a goal for Liverpool in any competition.

‘Keepers That Have Scored 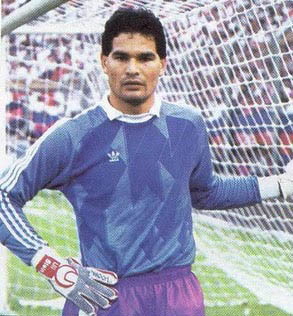 Often when you write articles about something happening, you need to limit what you’re writing in order to avoid a situation in which your article could go on indefinitely. That’s not the case with goal-scoring goalkeepers, however. One of the most famous of all-time was José Luis Chilavert, the Paraguayan goalkeeper who was a specialist in dead-ball situations, regularly taking penalties for his club and country.

Given that he was the first shot-stopper in the sport to score a hat-trick in a game, it’s fair to say that Chilavert is the exception that proves the rule when it comes to goalscoring goalkeepers. Indeed, only Rogerio Ceni has scored more goals than him as a goalkeeper, netting 131 times in his career. During the 2005 season, Ceni scored 21 goals for Sao Paulo and was in the club’s top-ten highest scorers of all-time.

That is in the modern era, of course. Prior to a rule change in 1912, football was still much closer to rugby than it is today. Goalkeepers could still handle the ball as far as the halfway line, meaning they’d regularly appear on the scoresheet. Those goals don’t really count in terms of what we’re talking about, however, given the extent to which the two versions of the game might as well have been different sports altogether.

Alex Stepney is a man who knows what it feels like to concede a goal from a goalkeeper, seeing the ball fly past him when Tottenham Hotspur’s Pat Jennings scored against him in the Charity Shield in 1967. He also knows what it’s like to have the boot on the other foot, though, thanks to Manchester United manager Tommy Docherty’s decision to get him to take the club’s penalties, meaning he was their top-scorer by the Christmas of 1973.

Stepney wasn’t the only United goalkeeper to score, though Peter Schmeichel’s goal came after he’d left the club and was playing for Aston Villa. It was October 2001 when the Dane ran upfield to be involved in a corner in the 90th minute, with Everton clearing the initial danger only to see the ball land at the goalkeeper’s feet and allowing him to smash it past his opposite number Paul Gerrard.

Schmeichel was the first goalkeeper to score a goal in the Premier League, with American shot-stopper Brad Friedel following in his footsteps three years later. He was playing for Blackburn Rovers against Charlton Athletic at the time and scored an equalising goal in the 89th minute after a corner was cleared and landed at his feet. Sadly for Friedel, Charlton immediately scored a winning goal and stole his glory.

Paul Robinson wasn’t just a character in Neighbours, he was also Tottenham Hotspur’s goalkeeper when they were playing Watford. He wasn’t actually trying to score, however, taking a free-kick from within his own half and avoiding everyone, bouncing in the box and going over the head of Watford goalkeeper Ben Foster. Remarkably, it was the England goalkeeper’s second career goal.

Everton, having been on the receiving end of a goal from a goalkeeper, were the beneficiaries of such a thing when Tim Howard’s kick got caught in the wind and sailed over the head of his opposite number. He was remarkably sanguine about it, though, stating afterwards that he was ‘disappointed’ and that ‘you never want to see that happen’. Like a pundit apologising for a fight, most Evertonians probably want to see it all the time.

Asmir Begovic managed to get himself into the record books by scoring the longest goal ever in a competitive match, seeing the ball travel 91.9 metres in the first minute of the game. It remained in the Guinness Book of World Records for eight years, only beaten when Newport County’s Tom King scored from a distance of 96.01 metres against Cheltenham Town in January of 2021.

The last Premier League goalscorer to tell you about is Alisson Becker, who arguably scored the most spectacular of the lot. As Liverpool looked to be being held to a 1-1 draw with already relegated West Bromwich Albion when pursuing a Champions League place, the Brazilian went up to get involved with a corner in the last minute of the match. Not only did he score the winning goal, but did so in a manner that would be the pride of any striker.