GamStop To Get Regulatory Approval For Self-Exclusion System 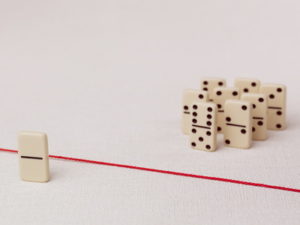 At the start of the year I wrote a piece entitled “GamStop Online Self-Exclusion System Has Flaws – Pressure Mounts For Change”. That piece was all about how a BBC investigation had discovered that the self-exclusion scheme GamStop had flaws that meant people could simply ‘cheat the system’ and continued gambling after theoretically excluding themselves from being able to do so.

Obviously that was a cause of concern both for the head of the scheme and regulators who had hoped to require all bookmakers to sign up to in order to reduce the numbers of problem gamblers.

It now appears as though regulators are prepared to approve the system, a year and a half after it was meant to be ready. The result is that all gambling companies will indeed be required to join up to it as part of the conditions that need to be met in order to allow them to sign up for a license to operate in the United Kingdom.

The Gambling Commission had initially been concerned about asking people to sign up because of the flaws in the system, with the idea being that people shouldn’t be able to place bets if they’d signed up to it, only for the BBC to discover that that could happen easily.

GamStop is a national self-exclusion system. The idea is that it puts you in control of your gambling activities by restricting what you can do online.

If you sign up then you’ll be excluded from being able to use gambling websites and apps used by gambling companies that are licensed to operated in Great Britain. You can choose how long you’d like to be excluded for and you simply need to give the system the following information:

From the moment you’ve signed up it can take as long as 24 hours for the system to kick-in, but from then on you will be unable to place bets online with any gambling company that has a license issued by the UKGC.

The minimum length of time that you can exclude yourself for is 6 months, with the other options being 1 year and 5 years. Even at the end of the period of time you’ve asked to be excluded for the exclusion with actually continue until you get in touch with GamStop and ask them to lift it. 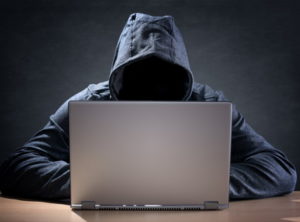 The not-for-profit organisation behind GamStop, The National Online Self-Exclusion Scheme Limited, is at pains to point out that the user is responsible for making a success of the system. After all, they won’t know if you’ve moved house, got a new email address or changed your last name, so you’ll need to keep them updated with those things if you wish to be blocked from using online bookmakers.

At the time of writing signing up to GamStop won’t stop you from receiving marketing emails from gambling companies. If that’s something that you think will bother you then you’ll have to unsubscribe from those emails yourself. Equally you’ll have to manually unfollow gambling companies on social media apps like Twitter and Facebook if you don’t want to see the marketing materials that they post on there.

Perhaps the most important point is that your withdrawable funds won’t be returned to your automatically from any bookmakers that you’ve got an account with. Instead you’ll have to contact those companies directly and ask them to release your funds back to you.

Tens Of Thousands Have Already Signed Up 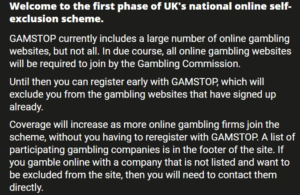 Despite both the limitations of the system and the fact that GamStop didn’t have the support of the UK Gambling Commission initially didn’t stop tens of thousands of people from signing up to the scheme after its unofficial launch in January of last year.

The service offers a list of gambling operators that have already committed to using the system, which is believed to run to around 99% of UK-facing companies that offer gambling in the form of online casinos and sportsbooks.

It is thought that Gambling Commission will now get behind it 100%, threatening companies that don’t sign up to it with the fact that they’ll lose their license to operate in the UK, which will be extremely costly for them. That being said, the bookmaker ComeOn! announced recently that it is going to close its UK-facing operation due to ‘strategic business reasons’, with the company’s Chief Executive pointing to ‘increased regulation’ as one of the reasons for the move.

With that in mind, there might be a risk of other companies deciding that there’s too much regulation being placed on them if they’re being asked to sign up to a scheme like GamStop in order to be given a UKGC license. Whilst the biggest companies are unlikely to leave the UK. market, its possible that some of the smaller ones similar to ComeOn! might follow their lead.

The Move Comes Amidst Calls For Tightened Regulation

Smaller companies such as ComeOn! leaving the British market is a risk that the Gambling Commission seems to be willing to make in order to appease those that have been calling for tighter regulation.

The Labour Party has been at the forefront of calls to tighten up the regulation surrounding online gambling for some time, with the Deputy Leader, Tom Watson, often leading the charge. The Party wants to see companies banning the use of credit cards to make deposits into betting accounts, for example, as well as a new Act to replace the Gambling Act of 2005.
That was put in place before the world of online casinos and bookmakers became

such big business, so there is a thought from some quarters that it isn’t fit for purpose in the modern day. Campaigners will be feeling invigorated after calls to curb the influence of Fixed Odds Betting Terminals were heeded with the reduction of the maximum stake from £100 to £2, despite the gambling industry’s warnings that that could lead to job losses.

Whilst the Gambling Commission refused to be drawn on whether or not it would be approving GamStop, saying that they had ‘nothing further to announce’ on the issue, The Guardian released a report that suggested it is due to be announced at any moment.