Does The Team That Takes The First Penalty Have The Advantage In A Shoot-Out? 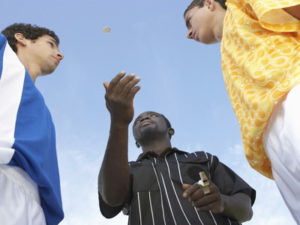 Luck or skill? Nerves or confidence? Going first or second? Penalty shootouts in football call into question each of these characteristics and they are arguably one of the biggest emotional rollercoasters in any sport.

After enduring 120 minutes of often gruelling intensity, it comes down to a player’s ability to then put the ball into the back of a net from 12 yards out with only the goalkeeper standing in their way. Easy right?

Perhaps under normal circumstances – the end of a training session for example. Though, in a pressure cooker situation, usually with millions of eyes on you, it becomes much more than a player’s ability to strike a spherical leather object with enough pace and precision into a 24-foot x eight-foot target, from, effectively close range.

It comes down to just 10 seconds for each player involved, often after hours of competing to get that far. One kick of the ball essentially disregards all prior achievements for a player, depending on the collective outcome.

While there are many components that can determine the result, one interesting school of thought, is how much of a difference it makes whether a team goes first or second in a shootout.

The short answer is that there is a difference. Dr. Ignacio Palacio-Huerta of the London School of Economics found in 2018, following a study of more than 1,000 penalties taken at World Cups and European Championship that teams who go first in a shootout, essentially have a 60 percent chance of winning.

When you think about it, the logic makes sense. In such an environment, there is much more pressure on the team who have to go second in a penalty shootout, because they are effectively playing catch up. Even if their opponents missed, the emphasis is still on them to take advantage and as a result, this is still a huge amount of pressure for the particular player. Palacio-Huerta emphasised that any team that wins a coin toss should always choose to go first.

What About England Though? 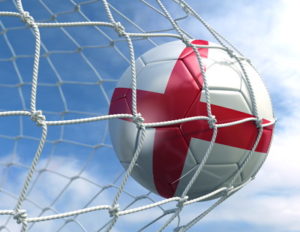 Most recently at the European Championship (Euro 2020) – delayed a year due to the COVID-19 pandemic – Palacio-Huerta’s theory was proved in the final as Domenico Berardi converted the first penalty of the shootout for Italy, with England playing catch-up from there on in, eventually losing.

It also subjected the Three Lions to their seventh penalty shootout loss at a major tournament since 1990 – that is seven World Cups and six European Championships when taking into account that England did not qualify for the 1994 World Cup or Euro 2008.

Penalty shootouts though have always been a major handicap for England; quite often the pressure proving to be too much, with Portugal eliminating the Three Lions on penalties at the quarter-final stage, in succession, first at Euro 2004 then at the World Cup in 2006.

It appeared that this ‘curse’ had been lifted at the 2018 World Cup, when they knocked out tricky opponents Colombia in the last 16, with Eric Dier dispatching the winning penalty.

For each of those occasions that England lost on penalties, let’s take a look to what extent, Palacio-Heurta’s theory checks out.

Effectively, the above table throws Palacio-Huerta’s theory completely out of the window – England have been notoriously unlucky with penalty shootouts at tournaments. Indeed, the penalty that Jordon Pickford saved in 2018 from Carlos Bacca was the first time a Three Lions goalkeeper had kept a penalty out since David Seaman, against Argentina in 1998 when he denied Hernan Crespo.

Therefore, the point here is that while on average 60% of shoot-outs may be won by the team that takes the first penalty the individual factors that affect each team can have a larger overall impact.  England don’t win penalty shoot-outs whether they take the first or second penalty.

How About In The Biggest Games?

Just because England don’t adhere to the study data doesn’t mean that other teams do not.  To see whether the 60/40 split in fortunes shown in the study actually translates to success in the biggest most high pressure games we have taken a look at various shootouts from the last few international tournaments to see how much effect going first really has.

The table above looks at every penalty shootout, for the quarter-final stage and beyond since 1982 and the various permutations.

From the 18 matches at each of the World Cups since 1982 from the quarter-final stage and beyond, 11 of those teams who took the first in the penalty in the shootout, emerged victorious; ironically which equates to 60 percent – the exact figure that Palacio-Huerta calculated from his study of 1,000 penalty shootouts!

It could be argued that in 2014, despite the Netherlands having two successive penalty shootouts, and going first each time with a 50 percent success rate, that fatigue could well have played a part in their semi-final shootout defeat against Argentina.

While no doubt, international tournaments often attract the most attention, there is obviously the domestic level as well where penalty shootouts occur. With that in mind, let’s take a look at how the shootouts have unfolded in the final of the Champions League dating back to 1984 since they were first introduced.

As can be seen above in arguably the most prestigious event in club football, since 1984, when a team has gone first in a penalty shootout, there have been five occasions out of 11 where they have triumphed. There is also no indication that the team going second in the shootout, was the strongest on paper, perhaps with the exception of Real Madrid and then Juventus in 1996.

This would suggest, that any team that is able to hold their nerve but also has the right combination of experience and ability, can overcome the very slight disadvantage of going second in a penalty shootout